Get Terpinolene Price
Previous
Next 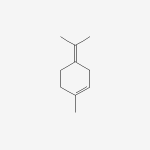 Iridoids are a large category of natural products, including nearly a thousand compounds, of which more than 90% are iridoid glycosides. From the structural core, it can be divided into cyclopentane iridoid and split iridoid according to whether it has a complete cyclopentane structural unit, among which cyclopentane iridoid includes gardeniside, Loganin, steganin, aucubin, vitexin, etc., and split iridoids include irisin, gentiopicrin, dangyaoside, picroside, morronin, etc. .

Terpinolene is one of the constituents of turpentine. Turpentine contains numerous isomers of terpinene, and terpinolene is actually one of the isomers. Appearance is a colorless to pale yellow liquid with a pine resin-like smell. Acute toxicity data: oral LD504.39ml/kg (rat), skin test LDs. >59/kg (rabbit). In addition, terpinolene is recognized by FEMA as GRAS, its FEMA number is 3046, and it has been approved for consumption by the FDA. The European Council has also listed it as a healthy and harmless spice and is temporarily allowed to use it as a food additive. Terpinolene is a by-product of the production of terpineol and is then refined. Generally, commercial products contain terpene compounds such as other isomers. The quality specifications of terpinolene produced in my country are: the appearance is light yellow transparent liquid, d 0.860～0.875, n 1.4750～1.4850, distillation range 180～190 ℃ ≥ 93% (volume fraction ). Terpinolene can be used in low-grade soap essence formulations, as well as preservatives and industrial solvents.

If you want to buy terpinolene, pls contact us to get a free quote.

Iridoids are widely distributed in dicotyledonous plants and have been proved to have various pharmacological activities, and are important natural active substances in Chinese herbal medicine. This paper summarizes the pharmacokinetics of iridoids in experimental animals from four aspects: absorption distribution, metabolism and excretion. Such compounds have the characteristics of rapid absorption and elimination in vivo, wide distribution in tissues and organs, and low oral bioavailability in terms of pharmacokinetics.

Experiments have shown that a variety of iridoids have brain targeting properties and can pass through the blood-brain barrier. Iridoids with different core structures have different metabolic pathways. They mainly undergo β-glucosidase hydrolysis, glucuronidation and isomerization and are metabolized and excreted from the body. The recovery rate of the drugs in vivo is low.

A process for preparing isoterpinene, which uses turpentine containing more than 96% of α-pinene+β-pinene as raw material, and is characterized in that the turpentine is prepared by two-step catalytic reaction under the action of two different catalysts Terpinolene, the first step of the catalytic reaction uses 13X sodium molecular sieve as a catalyst, the amount of which is 2%-10% by weight, the reaction temperature is 130-160 ° C, and the reaction time is 10-90 minutes,