Get Molybdenum Trioxide Price
Previous
Next 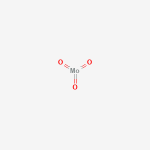 What is Molybdenum Trioxide?

Molybdenum trioxide (MoO3), also known as molybdenum anhydride, has a molecular weight of 143.94. White transparent orthorhombic crystal with light green microstrips, turns yellow when heated, and returns to its original color after cooling. The density is 4.692g/cm3, the melting point is 795℃, the boiling point is 1155℃, and it is easy to sublime. Insoluble in water, soluble in ammonia water and strong alkali solution to generate molybdate. It is soluble in strong acid and forms a complex cation with molybdenum dioxygen (MoO22+) and molybdenum oxide (MoO4+), and can form a soluble complex with acid radical. The oxidizing property is very weak and can be reduced by hydrogen, carbon and aluminum at high temperature. Reacts with phosphoric acid to generate phosphomolybdic acid.

It is very stable in the air. Dry hydrogen chloride is introduced into it, and it is heated and sublimated into pale yellow needle-like crystals. Reacts violently with halogen compounds such as bromine pentafluoride and chlorine trifluoride. It is decomposed by high heat and emits toxic fumes. Molybdenum trioxide can be used as analytical reagent, raw material for preparing metal molybdenum, molybdenum alloy and molybdenum salt; used as catalyst in petroleum industry; used in enamel, glaze, pigment and medicine, etc. It is prepared by burning molybdenum or molybdenum disulfide in air or roasting molybdic acid.

If you want to buy molybdenum trioxide, pls contact us to get a free quote.