Get Methyltriacetoxysilane Price
Previous
Next 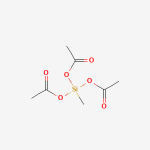 Organosilicon cross-linking agent contains two active groups with different properties on the same silicon atom, one is a silicon-functional reactive group such as -Si(OC2H5), which can chemically react with the surface of inorganic fillers to generate – Si-O-Si- chemical bond; the other is a carbon-functional reactive group, such as H2NCH2CH2CH2Si-, which can react with organic polymers and become the active ingredient of the polymer, thereby making the two properties very different material is well bonded. The silane crosslinking agent acts as a bridge at the interface of the two substances, and the formed chemical bond couples the two substances with different properties. In some cases, such compounds are used to treat the surface of glass fibers or other materials, so they are also Called surface treatment agent, in other cases it is used to improve the adhesion of synthetic resins to other materials, also known as tackifier, glass fibers treated with silane crosslinking agents are widely used in thermosetting and thermoplastic reinforced plastics , can greatly improve the strength of the material and the use temperature.

Methyltriacetoxysilane is a coupling agent for one-component RTV silicone rubber. Appearance: colorless and transparent liquid; Boiling point: 110～112℃; Density (25℃): 1.1740; Refractive index (20℃) : 1.4083. When added to silicone rubber, it can be cured and formed without heating. For some parts that cannot withstand high temperature, it is particularly important to add such coupling agents for cross-linking and curing of silica gel. Compared with other groups such as methoxy and ethoxy, its acyloxy group is more active, has a faster decomposition rate, and has a better effect on enhancing the adhesion of aluminum alloy, nylon, glass and ceramics.

If you want to buy methyltriacetoxysilane, pls contact us to get a free quote.