Get Diphenyl Sulfone Price
Previous
Next 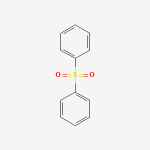 What is Diphenyl Sulfone?

Diphenylsulfone is a sulfone compound with two S-phenyl substituents. It is a crystalline powder soluble in organic solvents. It has been found in Gni dia glauca, Dioscorea bulbifera and other plants. It has the function as plant metabolite.

Under certain conditions, the sulfuric acid solution reacts with benzene to form diphenyl sulfone. Used as high-temperature solvent. This high-temperature solvent can be used to process highly rigid polymers, such as PEEK, which are only soluble in very hot solvents. It is prepared by sulfonation of benzene with sulfuric acid and oleum. For a typical process, benzenesulfonic acid is an intermediate. It is also produced from benzene sulfonyl chloride and benzene.

If you want to buy diphenyl sulfone, pls contact us to get a free quote.