Get Dimethyl Malonate Price
Previous
Next 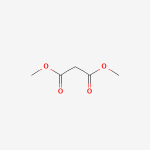 What is Dimethyl Malonate?

Dimethyl malonate is a diester derivative of malonic acid. It is a typical reagent in organic synthesis, for example, as a precursor of barbituric acid. It is additionally utilized in the synthesis of malonate. It can be manufactured from Dimethoxymethane and carbon monoxide.

Dimethyl malonate, likewise called Dimethylmalonate, is a general-purpose natural reagent. As an important organic synthesis raw material, dimethyl malonate can take part in various sorts of chain reactions, including: hydrolysis, decarboxylation, alkylation, Michael response, Knoevenagel response, nitrosation reaction as well as other reaction kinds, which additionally identify its broad use in the field of natural synthesis.

If you want to buy dimethyl malonate, pls contact us to get a free quote.

The prep work of cyanoacetic acid: make use of 20) 3 to manage chloroacetic acid remedy, make its pH worth between 7.0-7.5; Sodium cyanide solution is added salt chloroacetate solution, executes cyanidation in between specific 100-110 ℃ Response; Add focused hydrochloric acid to execute acidification response in the cyanide remedy, after the reaction is accomplished for a time period, vacuum cleaner concentration, dehydration till the weight proportion of cyanoacetic acid as well as water is in between 2-3: 1;