Get Diacetone Alcohol Price
Previous
Next 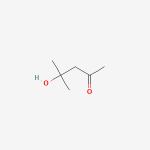 Diacetone alcohol is also known as methylpentanol and diacetone alcohol. The molecular formula is c6h1202. Colorless liquid. It has a pleasant aroma. It is miscible with water, ethanol, ether and other organic solvents. Relative density (d254) 0.9306. Melting point: – 44 ℃. Boiling point 167.9 ℃. Refractive index (n2od) 1.4232. Flash point 58 ℃. Flammable. Low toxicity, half lethal dose (rat, oral) 4000mg / kg. It shall be sealed and stored in a cool place.

Diacetone alcohol contains carbonyl group and hydroxyl group in its molecule, which has the chemical properties of ketone and tertiary alcohol. It reacts with alkali or decomposes when heated to more than 130 to produce 2 molecules of acetone. When heated with sulfuric acid or a small amount of iodine, isopropylidene acetone is formed. It reacts with sodium hypobromate to produce 2-hydroxyisovaleric acid and catalyzes hydrogenation to produce 2-methyl-2,4-pentanediol. The viscosity is low, and the temperature has little effect on the viscosity. Diacetone alcohol is non corrosive to gold chips and can be packed in iron, mild steel and aluminum containers. It shall be stored in a ventilated and dry warehouse, away from kindling and heat source.

Diacetone alcohol is widely used as raw material for high boiling point solvent, paint thinner, wood colorant, rust remover and dye, or as raw material for dye and resin solution. It can also act as a solvent for cellulose acetate, esterified cellulose and celluloid. It can be used for electrophoresis analysis in biochemical research.

If you want to buy diacetone alcohol, pls contact us to get a free quote.

CN201110198876.8 discloses a manufacturing procedure for manufacturing isohexanediol by hydrogenation decrease of diacetone alcohol, which comes from the technological field of production modern technology of isohexylenediol. In today development, diacetone alcohol is utilized as a basic material, as well as after combining with a supporting agent, under the action of a nickel-based catalyst, hydrogen is introduced under pressure to decrease as well as change to synthesize isohexylene glycol; the auxiliary representative is a basic compound, as long as the hydrogenation reaction is not malignant Both basic inorganic substances and also fundamental natural compounds can be affected. The addition of supporting agents gets rid of the drawbacks of reduced product return, several various other spin-offs, high manufacturing price, difficult operation, and trouble in product separation in the standard procedure, and decreases the manufacturing of other by-products in the reduction procedure, consequently improving the efficiency of the reduction process. The product return of isohexanediol synthesis, the purity of isohexanediol can reach 99.5%, and also the mass yield is enhanced to 99%.