Get Alpha-Chloralose Price
Previous
Next 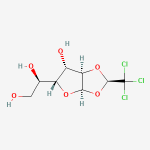 Alpha-chloralose, (R) – 1,2-o – (2,2,2-trichloroethylene)- α- D-furoglucose is a crystalline powder, which is easily soluble in water, ethanol, ether, glacial acetic acid, somewhat soluble in chloroform, and practically insoluble in petroleum ether. Alpha-chloralose is created by the reaction of glucose with anhydrous chloral under heating (21 ).

Alpha-chloralose (also known as α- Chloraldose) is a bird killing agent and a rodenticide used to kill mice at temperatures below 15 ° C. It is also widely used in neuroscience and veterinary medicine as an anesthetic and sedative. Used alone or in combination, such as with urethane, for long-lasting but mild anesthesia.

Chemically, it is a chlorinated acetal derivative of glucose. It is listed in Annex I of directive 67/ 548/ EEC and classified as hazardous (xn). Alpha-chloralose exerts barbiturate like effects on synaptic transmission in the brain, including inhibition γ- Effective effect of aminobutyric acid type a receptor (GABAAR). Structural isomers of chloraldose β- Chloraldose (also known as p-chloraldose in the old literature) is inactive as a GABA A R regulator and a general anesthetic.

Alpha-chloralose is often abused because of its bird killing properties. In Britain, protected Raptors have been killed using this chemical. Legal use of bird control also often leads to secondary poisoning death of raptors, and primary poisoning of non target species due to bait consumption, such as kerru pigeons in New Zealand.

If you want to buy alpha-chloralose, pls contact us to get a free quote.