Get 2-Phenyl-1-propene Price
Previous
Next

2-Phenyl-1-propene, also known as α-methylstyrene (abbreviated as a-MS or AMS) or phenylisopropene, is a by-product of the production of phenol and acetone by the cumene method, generally a by-product of phenol per ton 0.045t α-MS.

2-Phenyl-1-propene is a colorless liquid with a pungent odor. The molecule contains a benzene ring and an alkenyl substituent on the benzene ring. It is prone to polymerization when heated. 2-Phenyl-1-propene can be used in the production of coatings, plasticizers, and as a solvent in organic synthesis.

The synthetic route of 2-phenyl-1-propene

Application of 2-Phenyl-1-Propene in Organic Synthesis

α-MS is the basic raw material for organic synthesis and can be used to synthesize cumene, dicumyl peroxide, p-cumylphenol, etc. α-MS hydrogenation to produce cumene was industrialized in 1980, using palladium/aluminum catalyst, the reaction was carried out in a trickle bed reactor, the conversion rate of α-MS was greater than 99%, and the by-products were very few, so the cumene was It can be directly returned to the phenol acetone production line.

Synthesis of dicumyl peroxide (DCP) by α-MS and cumene hydrogen peroxide (CHP) is another process route for DCP synthesis. Using phenol as a catalyst, the reaction temperature is 15 to 45 ° C, and the synthesis of DCP is carried out in one step. Compared with the traditional benzyl alcohol process, the reduction, water washing, and concentration processes for preparing benzyl alcohol can be omitted. The reaction formula is shown in the following figure. The p-cumyl phenol synthesized by α-MS and phenol under the action of acid catalyst is the raw material for synthesizing thermoplastics and polycarbonate. 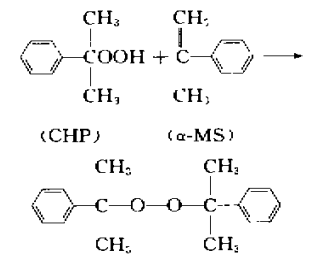 α-MS can be used as a resin modifier to copolymerize with acrylonitrile, methyl methacrylate, maleic anhydride, etc. to produce copolymer resins with different properties. In the 1970s, there were dozens of α-MS copolymers. Appeared, the application range has penetrated into the fields of rubber, plastics, adhesives, coatings and so on. Among them, the heat-resistant modification of ABS resin by α-MS is the field with the largest consumption, and 45% of the α-MS in the market is used to synthesize ABS resin.

The most typical way to improve the heat resistance and rigidity of ABS resin is to replace styrene with α-MS. α-MS-AN copolymer can be dissolved with ABs resin in any proportion. The glass transition temperature measurement and transmission electron microscope observation show that the prepared heat-resistant ABS resin has a microscopic two-phase structure, in which α-MS-AN copolymer and SAN in the ABS graft form the continuous phase of the resin, and the rubber particles are dispersed Phase, α-MS-AN copolymer provides its heat resistance and rigidity, ABS provides toughness. Compared with general-purpose ABS resin, the thermal deformation temperature of the modified ABS resin is increased by 10~15℃.

Using α-MS as the starting material, through condensation reaction, hydroxyisopropylation reaction, chloromethyl etherification reaction and cyclization reaction, etc., the most widely used Jiale musk (its trade name) with excellent performance can be prepared. for Galaxolide). Its intermediate product, hexamethylindanol, is also a valuable fragrance after being refined. It has a strong and lasting aroma, amber, musk-like aroma, and can be directly used as a blending essence for soaps, detergents, talcum powder, etc. preparation.

Pentamethylindan can also carry out Friedel-Crafts reaction under the catalysis of aluminum trichloride, and use acid chloride as acylating agent to generate fragrances with woody, fruity, amber, and musk flavors. Pentamethylindan can also successively synthesize many new varieties such as indanol, indanone and indanether with spice value. In addition to musk galore, 2-phenyl-1-propene is also used to synthesize fragrances such as cashmidone (with a strong, persistent and sweet musky woody aroma) and solanitol (with an elegant rose aroma).

Using a solid acid capable of generating active cations as a catalyst, α-MS can be polymerized by the mechanism of ionic polymerization to obtain low molecular weight polymers. The degree of polymerization is closely related to the reaction temperature. α-MS oligomers can significantly improve the rheological properties of plastics, significantly reduce the melt viscosity of polyolefin and polyvinyl chloride resins, and have been widely used as plastic hope enhancers.

Linear dimers can be used as cross-linking aids for the production of cross-linked polyethylene. In the polymerization of acrylic coatings, adhesives, ABS, styrene, vinyl chloride, chloroprene and styrene butadiene Molecular weight regulator or chain transfer agent is used, its function is similar to dodecyl mercaptan, it can replace thiol molecular weight regulator, and it does not have the unpleasant odor of alkali alcohols. In the manufacture of lubricating oils, linear dimers can increase the friction coefficient of lubricating oils, and hexamers can be used as viscosity modifiers for petroleum lubricating oils. Linear dimer can also be used as an excellent filler for various air cleaners, deodorants, soaps, detergents, shampoo and other products.