Get o-Phenanthroline Price
Previous
Next 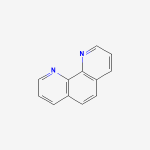 O-phenanthroline is an organic compound with molecular formula C12H8N2. The solid is white crystal and dissolves in water to form a light yellow to yellow solution. When recrystallized with water, it contains a crystal water molecule. The o-phenanthroline hydrate is a white crystal. When recrystallized with benzene, there is no crystal water, and the melting point is 98-100 ℃ (117 ℃). The boiling point is above 360 ℃. Soluble in ethanol, benzene and acetone, insoluble in petroleum ether. It forms complexes with iron, copper, cobalt, nickel and 2,2-BIPYRIDINE, forms red complexes with Fe2 +, and oxidizes with potassium permanganate to obtain 2,2-bipyridine-3,3 ‘- dicarboxylic acid.

O-phenanthroline is a common redox indicator. It is a bidentate heterocyclic compound ligand, similar to 2,2-BIPYRIDINE. It is a common auxiliary ligand in the construction of crystal materials. It has a strong chelating property and can form very stable complexes with most metal ions. It can be used as a quantitative colorimetric reagent for copper and iron, and also as an indicator for cerium sulfate titration of iron salts; It can also be used as a dye for animal fibers.

O-phenanthroline can form facilities with different transition metals. Given that the complicateds created are chelate complexes, they are fairly steady. The complicateds and also their by-products formed with copper can be used as non-oxidative nucleic acid cleaving enzymes because they have particular cleavage activity on DNA, and also further have specific anticancer tasks.

O-phenanthroline is a typical ligand for spectroscopic decision of steels and also spectroscopic evaluation of CO2 reduction. It is used for the cross-linking response of organic boronic acid catalyzed by Cu(II), etc. It can also be used as a redox sign as well as a reagent for the decision of ferrotitanium.

It forms facilities with iron, copper, cobalt, nickel as well as 2,2′-bipyridine, forms red facilities with Fe2+, as well as is oxidized with potassium permanganate to acquire 2,2′-dipyridyl-3,3′-dicarboxylate acid. It can be used as a measurable colorimetric reagent for copper as well as iron, and as an indication for titrating iron salts with cerium sulfate; it can likewise be used as a dye for pet fibers. The o-phenanthroline-Fe(II) indicator can be prepared by liquifying 1.485 g of o-phenanthroline monohydrate and 0.695 g of FeSO4-7H2O in 100 mL of water. Indicator for ceric sulfate titration of iron salts. A related ligand is red phenanthroline (BPT), 4,7-diphenyl-1,10-phenanthroline. O-phenanthroline can likewise be used for the analysis of the material of alkyl lithium substances. The details steps are to make the example react with a small amount (about 1 mg) of o-phenanthroline to provide a dark shade, and after that titrate with alcohol till the colorless titration end point is reached.

In the solution of pH=2 ~ 9, o-phenanthroline responds with divalent ferrous ion (Fe2+), the selectivity of this reaction is very high, and also the resulting orange-red complex is extremely secure, lgK stable = 21.3 (20 ° C), its option has an optimum absorption top at 510nm (visible light), as well as this shade reaction can be made use of to establish trace iron by visible light spectrophotometry.

If you want to buy o-phenanthroline, pls contact us to get a free quote.

The significant advantages of the present invention are: