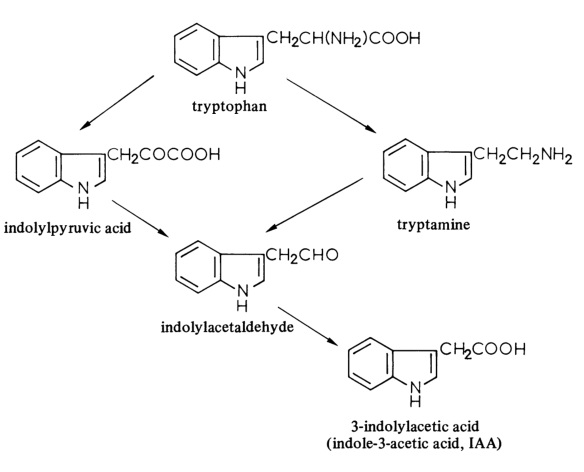 The biosynthesis of Indole-3-Acetic Acid

3-Indolylacetic acid (indole-3-acetic acid, IAA) is one of the auxins, which together with the gibberellins and abscisic acid, cyto- kinins and ethylene are hormones regulating the growth and development of plants. IAA is a ubiquitous constituent of higher plants and the most important auxin. Some other, non-indolic compounds, including phenyl- acetic acid biosynthesised in plants from phenylalanine, have similar properties and synthetic auxins have also been prepared.
In the plant, Indole-3-Acetic Acid conjugates with many compounds, including glucose and other sugars, and with aspartic and glutamic acids. This is probably a way of storing the hormone for future use.
Indole-3-Acetic Acid initiates many growth effects in plants, including geotropism and phototropism, development of the ovary, division of cells, enlargement in callus tissue, root formation and apical dominance. When fed to plants, the hormone causes growth up to a maximum, which depends on the type of tissue being fed, and thereafter inhibits further growth, probably through the formation of ethylene, which is growth-inhibitory. Stern tissues tolerate the highest levels of Indole-3-Acetic Acid and root tissues the lowest. In the plant, the most active sites of Indole-3-Acetic Acid synthesis are the young, expanding leaves.

“Zhishang” products are exported to Europe, North and South America, the Middle East, Asia Pacific and Africa area, so as to establish a long-term and stable cooperation relationship with customer in the world.

You can get free samples for some products,you only need to pay the shipping cost or arrange a courier to us and take the samples. You can send us your product specifications and requests,we will manufacture the products according to your requests.