Get Guanidine Carbonate Price
Previous
Next 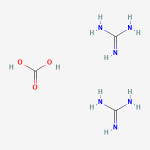 What is Guanidine Carbonate?

At 170-230 °C, dicyanide salts and ammonia are melted to form guanidine salts (guanidine hydrochloride, guanidine nitrate). Then, guanidine salt is made into alcohol solution, free guanidine is added with soda, and carbon dioxide is absorbed to obtain guanidine carbonate.

If you want to buy guanidine carbonate, pls contact us to get a free quote.