Get Copper Peptide Price
Previous
Next 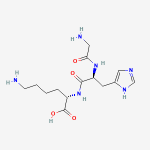 What is Copper Peptide?

The tripeptide (copper peptide) is developed by 3 amino acids, the tripeptide is additionally called blue copper peptide; glycyl-L-histidyl-L-lysine. Tripeptide is a ternary molecule created by three amino acids linked by two peptide bonds, which can effectively prevent the nerve conduction of an acetylcholine substance, relax muscles, as well as boost vibrant wrinkles.

Copper peptide (GHK-Cu), also referred to as hepatocyte growth variable, is a facility of the naturally taking place tripeptide glycyl-L-histidyl-L-lysine and also copper (II), which has a strong Affinity. GHK-Cu is present in human plasma as well as is believed to advertise a range of useful impacts, consisting of injury recovery, antioxidant and also anti-inflammatory.

Tripeptide (GHK) is an all-natural tripeptide compound (Gly-L-His-L-Lys) which is linked by glycyl, L-histidyl and L-lysine. Its molecular formula is C14H24N6O4, With a molecular weight of 340, the tripeptide can be properly complexed with a comparable amount of copper to create a copper peptide. Copper is a vital aspect in living microorganisms, and it participates in crucial physical features such as mobile respiration, anti-oxidation, cleansing, coagulation, melanin and also connective tissue generation in living organisms; tripeptide can effectively complicated and also transport copper elements to play an equivalent duty. For example, the complexed copper peptide can successfully stimulate the biosynthesis of collagen in fibroblasts, thereby promoting the rapid recovery of injuries; the copper peptide can also effectively stop the nerve transmission of acetylcholine materials, thus It has the functions of kicking back muscle mass and also enhancing vibrant wrinkles. Tripeptides are now extensively made use of in cosmetic additives.

If you want to buy copper peptide, pls contact us to get a free quote.

The Difference between Tripeptide and Hexapeptide

Residence of Tripeptides
The tripeptide (copper peptide) is created by 3 amino acids, the tripeptide is likewise called blue copper peptide; glycyl-L-histidyl-L-lysine. Tripeptide is a ternary particle created by 3 amino acids attached by 2 peptide bonds, which can effectively avoid the nerve transmission of an acetylcholine compound, unwind muscle mass, as well as enhance vibrant wrinkles.

Feature of hexapeptides
Commonly called botulinum-like bacterium, by applying hexapeptides and also worsening amino acids into a botulinum-like structure, it can block nerve transmission of contraction details, impact skin nerve transmission, unwind face muscles, and also achieve smoothness The purpose of vibrant lines, static lines as well as great lines. As well as avoid creases caused by too much release of catecholamine, such as wrinkles formed by repeated influence on the face of mature skin. Successfully relieve and also prevent the contraction as well as task of the muscular tissues around the forehead as well as forehead lines, the crow’s feet of the eyes and the wrinkles around the creases, help the muscles to relax, recover the flexible tissue of the skin to a smooth and also smooth line, as well as lower the fine lines on the face.

The distinction between tripeptide and also hexapeptide
Tripeptide has anti-carbonylation, protects collagen from being harmed by turned on carbon teams, promotes the growth of kind III collagen, and has anti-oxidative and anti-glycation impacts;

Hexapeptide blocks nerve transmission, lowers expression lines and creases, and also has the results of Botox without the negative effects of Botulinum contaminant A. It is safe and also rather risk-free to use, and is extensively used in anti-aging skin treatment products.