Get Chlorpheniramine Maleate Price
Previous
Next 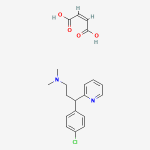 What is Chlorpheniramine Maleate?

Chlorpheniramine molecular formula C20H23ClN2O4, molecular weight 390.86. The taxonomic name is chlorpheniramine maleate. White crystalline powder. No odor and also bitter taste. Melting point 130 ~ 135 ℃. Soluble in water, ethanol and chloroform, the aqueous service is acidic. Perishable when revealed to light. It can be acquired by the condensation of pyridine, p-chlorotoluene and also dimethylamide, and so on and then treated with maleic acid.

Chlorpheniramine is one of the greatest antihistamines with resilient effect, reduced dose and couple of side effects. It can generally competitively block histamine H1 receptors on allergic reaction target cells, to make sure that histamine can not bind to H1 receptors, thus preventing the allergic reactions brought on by it. It is suitable for different allergic diseases, medication allergies, and so on. Dental absorption is fast and total, as well as the occurrence of unfavorable reactions is reduced. The sedative result is weaker than that of promethazine, as well as it additionally has a particular anticholinergic effect. It is similar to diphenhydramine, but with much less central restraint. It can cause epilepsy and also is contraindicated in people with epilepsy. It should be utilized with caution in lactating females, glaucoma, hypertension, hyperthyroidism, and also clients with benign prostatic hypertrophy. During the period of taking the medication, it is not enabled to drive car such as vehicles, watercrafts, and also planes or operate makers.

Chlorpheniramine maleate made use of for colds and sensitive illness of skin as well as mucous membrane layers. Its functions are generally used for urticaria, eczema, dermatitis, medication eruption, skin pruritus, neurodermatitis, insect bites, solar dermatitis, as well as likewise for allergic dermatitis and vasomotor rhinitis., medication as well as food allergies. Along with the solid competitive barring of histamine H1 receptors on allergy target cells, it has an anti-allergic impact by antagonizing H1 receptors, and additionally has an anti-M choline receptor impact. Signs and symptoms such as dry mouth, constipation, thickened spit, and also completely dry nasal mucosa take place.

(±) – Chlorphenamine maleate has been used in:

If you want to buy chlorpheniramine maleate, pls contact us to get a free quote.

The Mechanism of Action of Chlorpheniramine Maleate

There are two types of histamine receptors, H1 and H2, which have different effects when activated. When the H1 receptor is excited, it can cause bronchial and gastrointestinal smooth muscle contraction, vascular smooth muscle relaxation, enhanced atrial muscle contraction, and slow atrioventricular conduction. H2 receptor stimulation can cause gastric parietal cells to secrete gastric acid and so on. These two types of effects are each antagonized by different drugs. H1 receptor antagonists replace histamine in the body and competitively antagonize its action. It cannot inactivate histamine, nor does it inhibit its synthesis and release. Therefore, it is mainly used to relieve the symptoms of allergic reactions, such as urticaria, angioedema, rhinitis, conjunctivitis, and itching caused by skin diseases; some traditional H1 receptor antagonists can antagonize acetylcholine, 5-HT, adrenal glands H1 receptor antagonists such as diphenhydramine, diphenhydramine, and promethazine have antiemetic properties and can be used to treat nausea, vomiting and diarrhea in Meniere’s disease and related diseases symptom.

Some drugs also have anti-vertigo and sedative effects. Promethazine can be used for preoperative anesthesia and short-term treatment of insomnia due to its sedative effect. H1 receptor antagonists can enhance the effects of ethanol, barbiturates, hypnotics, analgesics, anxiolytics, tranquilizers and other central depressants. Monoamine oxidase inhibitors may enhance their anticholinergic effects. The drug can also synergize with atropine and tricyclic antidepressants. It can mask the ototoxicity of aminoglycosides, so that the skin test is false positive and the drug is stopped early. Before using antihistamines, their incompatibilities should be fully understood. Combined with sedatives, hypnotics, tranquilizers or alcoholic beverages, it can strengthen the central inhibitory effect. Delay the intrahepatic metabolism of phenytoin sodium and increase its blood concentration.

Difference Between Chlorpheniramine and Ketotifen