Get Benzylamine Price
Previous
Next 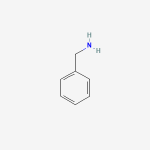 Benzylamines come from a course of organic compounds called benzoamines. These are substances including a phenylmethylamine moiety containing phenyl substituted with methylamine. This anemic water-soluble fluid is an usual forerunner in organic chemistry as well as is used in the commercial manufacturing of lots of medicines. The hydrochloride was utilized to deal with nausea throughout the mercury atlas 6 objective, during which NASA astronaut John Glenn came to be the initial American to orbit the planet.

Benzylamine, also known as benzylamine α- Aminotoluene and oleanol. Colorless liquid. Generating smoke in the air. Boiling point 185 ℃, 90 ℃ (1600pa), relative density 0.9813, refractive index 1.5401, UV λ max255、262、270nm。 It is miscible with water, ethanol and ether, and soluble in acetone and benzene. K = 2.4 at 25 ℃ × 10-5, showing alkaline reaction. It can absorb CO2, react with halogenated hydrocarbon to generate N-substituted benzylamine, react with acyl chloride, anhydride or ester to generate n-benzylamide, and react with aldehyde and ketone to generate n-benzylimine. Preparation method: it is prepared by the reaction of benzyl chloride with ammonia, or by the reduction of benzonitrile, or by the reduction and ammoniation of benzaldehyde with NH3 and H2 / Ni. Uses: used in organic synthesis, qualitative test of metal organic compounds, determination of platinum, vanadium and tungstate, and as precipitant of thorium, cerium, lanthanum, zirconium, etc.

If you want to buy benzylamine, pls contact us to get a free quote.

The preparation method is as follows: adding ethanol, urotropine and benzyl chloride into a reaction kettle, heating to 30-35 DEG C, reacting for 4 hours, adding hydrochloric acid, raising the temperature to 45-50 DEG C, reacting for 2 hours, cooling, filtering, and heating the filtrate to remove ethanol, Change to vacuum distillation, steam to dryness, add lye, free benzylamine, and then vacuum distillation to obtain the product. Ammonolysis method can also be used to add benzyl chloride, ammonium hydroxide and amine bicarbonate into the reaction pot, react at 30-35 °C for 6 hours, stand still to separate the oil layer, heat the reaction liquid to drive out ammonia gas, distill under reduced pressure at 100 °C, and then add free Alkali, the alkali solution is removed, and the oil layer is distilled to obtain the product.