Get Benzalkonium Chloride Price
Previous
Next 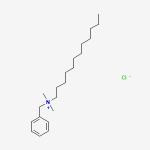 What is Benzalkonium Chloride?

Benzalkonium chloride, likewise referred to as BZK, BKC, BAC, alkyldimethylbenzylammonium chloride and ADBAC, is a cationic surfactant coming from the quaternary ammonium team. It has three major uses: as a biocide, a cationic surfactant, and as a stage transfer agent in the chemical industry. This compound is a heterogeneous combination of numerous even-numbered alkyl alkane benzyl chlorides.

Benzalkonium chloride is a quaternary ammonium salt compound. As a broad-spectrum bactericide of cationic surfactant, it can effectively regulate the recreation of microorganisms and algae in water and also the development of scum, as well as has good sludge removing result as well as specific diffusion as well as penetration., At the same time, it has specific degreasing, deodorizing ability and corrosion restraint result. At the same time, since benzalkonium chloride has a great disinfection result, it is extensively utilized in medical sanitation and also is the primary element of usual eye decreases as well as Band-Aids.

Benzalkonium chloride is an active ingredient in many consumer products:

If you want to buy benzalkonium chloride, pls contact us to get a free quote.

S2: Inject benzalkonium chloride into a group of heating containers, heat through a heating device, and inject 3% water for injection to heat and dissolve;

S5: The prepared mixed solution is then injected into the tank for storing the solution.