Get 1,2-Pentanediol Price
Previous
Next 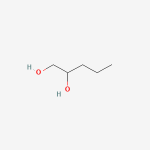 1,2-Pentanediol is an important organic intermediate utilized in the synthesis of propiconazole, a special fungicide for industrial crops; it additionally has excellent hydrating residential or commercial properties as well as antibacterial impacts, and is utilized in skin lotions, eye creams, skin creams, and baby care. It is likewise an important raw material for the production of polyester fibers, surfactants, drugs and various other products.

1,2-Pentanediol is an outstanding humectant with anti-bacterial properties, as well as its synergistic impact with traditional chemicals likewise helps in reducing the quantity of typical chemicals in formulas. In sun block items, it is much more valuable to enhance the water resistance of the product and also the capacity to liquify some components. 1,2-Pentanediol helps to maintain formulas while also minimizing the sticky feel of solutions due to added polymers.

If you want to buy 1,2-pentanediol, pls contact us to get a free quote.

1,2-O-diol is an important chemical raw material, which is often used to produce polyester, surfactant, and can also be used as a raw material for pharmaceuticals. Linear 1,2-vicinal diols, especially C2-C4 vicinal diols, are mostly prepared by hydration of epoxides at high temperature and pressure or under alkaline or acidic conditions, and can also be prepared by oxidative hydration of terminal olefins.

1,2-Pentanediol (1,2-o-diol of C5) is an important organic intermediate. It is mainly used for the synthesis of bactericide propiconazole, and is also used in the production of polyester fibers, surfactants, cosmetics, and pharmaceuticals. important raw materials for other products. US Patent US4605795A (1986-08-12) discloses a continuous production process in which n-pentene and peroxypropionic acid are reacted in a solvent to generate 1,2-epoxypentane, which is then rehydrated to obtain 1,2-pentanediol.

1,2-Pentanediol is a straight-chain diol with distinct polar and non-polar ends, which is different from other diols in nature and has versatility. It is the key intermediate of the systemic fungicide propiconazole with high efficiency, low toxicity and long lasting effect; propiconazole has played an important role in the prevention and control of fungal diseases such as food crops, vegetables and fruits, and has a very broad application prospect. . As an excellent moisturizing agent, antibacterial agent and solubilizer, 1,2-pentanediol can effectively improve the water resistance of sunscreen cosmetics, and is widely used in various daily care products.