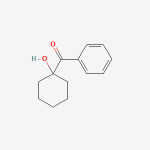 What is 1-Hydroxycyclohexyl Phenyl Ketone?

1-Hydroxycyclohexylphenyl ketone (184) is a new as well as effective photosensitive initiator presented by Ciba geigy company in Switzerland in the 1980s. The item code is irgacure 184 as well as the melting point is 47-49 ℃. It is an effective and yellowing immune totally free radical (I) kind solid photoinitiator, which has the advantages of long storage time, high initiation effectiveness and broad UV absorption array. It is generally used for UV treating of unsaturated prepolymers (such as acrylic acid ester) together with solitary or multi-functional plastic monomers and oligomers, as well as is particularly suitable for coverings as well as inks with high yellowing degree.

1-Hydroxycyclohexylphenyl ketone is a photoinitiator (PI) molecule that can be utilized for chain transfer polymerization. PI can be included into the polymer matrix by adding chromophores as side teams. It can be utilized as a component to promote UV curing, as well as additionally as a base material for developing block and graft copolymers.

Photoinitiator 184, also referred to as photosensitizer or picture healing representative, is a sort of compound that can absorb particular wavelength power in the ultraviolet light region (250 ~ 420 nm) or the visible light area (400 ~ 800 nm) to create cost-free radicals and also cations. Therefore initiating polymerization, crosslinking as well as curing of the monomers. In the light treating system, consisting of UV glue, UV paint, UV ink, etc. After getting or taking in exterior power, it goes through chemical changes and breaks down into complimentary radicals or cations, thus initiating polymerization.

If you want to buy 1-hydroxycyclohexyl phenyl ketone, pls contact us to get a free quote.

Photoinitiator 184 is widely used in coatings, inks, electronics, optical fibers, adhesives, printing and other fields, and shows strong vitality. Examples of its application are as follows:

UV resin for the production of reflective film

By weight, including 25%-50% bisphenol A epoxy acrylate, 25%-50% trimethylolpropane triacrylate, 18%-33% tetrahydrofuran acrylate, 1%-5% 1-hydroxyl ring Hexyl phenyl ketone and each component are prepared according to the above weight ratio. -Hydroxycyclohexyl phenyl ketone is successively added to the mechanically stirred reactor, and while adding, stirring is performed for 2 hours to 3 hours, and finally the discharging valve is controlled to slowly discharge, measure and pack, and the present invention is easy to prepare, Low cost, high mold release, high leveling, high hardness, yellowing resistance, can meet the requirements of high-performance reflective film produced by UV coating method.

The matte antistatic coating material is used for release paper, and the matte antistatic coating material is composed of the following components by mass percentage: 2% of silica particles, acrylic polyol with an average molecular weight of 500-2000 28%, polyoxyalkylene series polyol resin with average molecular weight of 200~2500 36%, polyethylene glycol 20%, cyclomethicone 4%, 1-hydroxycyclohexyl phenyl ketone – photoinitiator 184 is 10%; the particle size of the silica particles is a particle size distribution determined by a laser diffraction scattering method with a particle size in the range of 0.1-2 μm and 1.5-5 μm, respectively, with peaks and an average particle diameter of 4 μm or less. The invention not only solves the problem of low bonding force and unstable peeling force between the coating layer of the release paper and the release agent coating, but also improves the scratch resistance and the antistatic performance of the film surface.

The specific method of the photoinitiator 184 includes the following steps:

Utilizing hydrogen chloride in the by-product hydrochloric acid in the process of synthesizing alkyl ketones, in hydrogen peroxide and organic solvent systems, chlorination and hydrolysis are carried out with L potassium molecular sieve catalyst to form α-hydroxy ketones. This new synthesis method has the following advantages: The raw materials are cheap and easy to obtain, safe and environmentally friendly, and the hydrogen chloride generated during the electrophilic substitution reaction of the acid chloride under the catalysis of Lewis acid is fully utilized, and the hydrogen chloride is recycled to reduce the discharge of waste acid water, and is environmentally friendly. The selective chlorination and hydrolysis are completed in the same kettle, the operation is simple, the loss is small, and the yield is high.

A synthesis technique of 1-hydroxycyclohexyl phenyl ketone, which is characterized in that the steps are as follows: